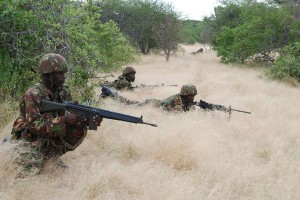 At least 20 al Shabaab militias have been killed by Amisom and Somalia National Army troops in Hiraan, central Somalia.

Amisom said this happened after al Shabaab fighters launched a guerilla assault on Amisom and SNA bases in two villages a few kilometres from Baladweyne.

Several other fighters were injured.

“Despite al Shabaab adopting crude war tactics like hit and run as well as old-school guerilla warfare, Amisom have established their grip and asserted their capability to both pre-empt and neutralise attacks from the militants with minimum to zero casualties on their troops,” an Amisom official said.

Special representative of the AU Commission chairperson to Somalia Maman Sidikou has reiterated the need to increase peace initiatives if stability is to be realised.

Sidikou said it is necessary to appreciate Amisom troops’ bravery in war-torn Somalia.

“We cannot underestimate the power of those who have made deliberate efforts to shun violence and embrace peace. A bright future for Somalia depends on collaborative efforts,” Sidikou said during the International Day of Peace celebrations.