You are here: Home / Europe / Amid Anti-ISIS Airstrikes, will Russia and US team to fight Islamic State in Syria? 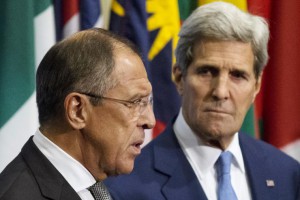 After carrying out airstrikes on so-called terrorist targets in Syria daily during the past month, Russia now wants to work with the U.S. in fighting terrorism in the war-torn Middle Eastern country, Foreign Minister Sergei Lavrov said on national television Saturday. The statement came after the Russian foreign minister and U.S. Secretary of State John Kerry conducted talks in Vienna Friday centered on launching a political process that would bring together for peace talks the authoritarian regime of Syrian President Bashar Assad and opposition forces.

“We are ready for such a profound coordination,” Lavrov said during an interview on the news program “Vesti v Subbotu,” according to Russia’s official news site Sputnik International. “We are ready to include the patriotic opposition, including the so-called Free Syrian Army, to provide it with aerial support, although we were declined information on where, according to U.S. data, terrorists are located, and where is the patriotic opposition.”

While Russia has been conducting bombing raids in Syria since the end of September, it has been militarily involved in the country since it began moving both humanitarian aid and weapons there almost seven weeks ago. In addition to aiming at Islamic State group targets, Russia’s military has targeted Syrian rebel forces that oppose Assad’s government.

However, the Vienna talks bringing together representatives of Russia and the U.S., as well as Saudi Arabia and Turkey, appear to have made some progress in developing an understanding between the former Cold War rivals with respect to the Syrian Civil War. The most important jobs for Moscow now is to begin dialogue with opposition groups in Syria and continue talks with the U.S., Lavrov said during the TV interview.

“When a person refuses to talk on serious issues, a question arises, whether this person understands what is going on, whether a person has ideas on how to settle a problem,” Lavrov said on the show carried by the TV channel Rossiya-1. “When our U.S. colleagues come out with such initiatives, we always react and never avoid a conversation.”

Kerry, who has remained in close contact with Lavrov throughout the fighting in Syria, alluded to the fact that there must be change there after his meeting with Lavrov. However, the secretary of state was realistic about the differences of opinion in Moscow and Washington over how to bring peace and resolve the war.

“The hard work of shaping that transition [in Syria] requires an international approach and a consistent approach,” Kerry said following the meeting in the Austrian capital, according to the Wall Street Journal. “There remain differences among us about exactly what the final approach looks like.”