You are here: Home / MidEastGulf / America’s dangerous gamble with islamist rebels in Syria 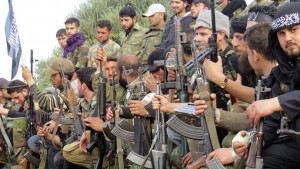 With each falling Russian bomb in Syria, the rubble of America’s failed policy there grows. Pentagon-trained rebels have been abducted by Al Qaeda’s local affiliate and their weapons have been pilfered. More than a year after President Barack Obama pledged to “degrade and ultimately destroy” the Islamic State in Iraq and Syria (ISIS), it is still gaining territory.

Though Washington is sitting idly as the Russians and ISIS expand their Syrian presence, its Middle East allies will not. They are likely to increase the stakes by supporting radical factions. In doing so, they will transform the moderate American-supported rebels from an endangered species into an extinct one. Soon Washington will have no Syrian allies.

The United States has backed two Syrian training programs. Both have failed miserably. A Pentagon initiative known as “train and equip” has seen graduates captured by the Al Qaeda affiliate Jabhat al-Nusra. A covert operation, managed by the Central Intelligence Agency (CIA), known as the Military Operations Command (MOC), provides weapons and training to select brigades from the umbrella organization known as the Free Syrian Army (FSA). It has not fared much better, though.

Washington’s greatest dilemma is that these FSA units are simply too small to take on ISIS. Most have fewer than 2,000 fighters, not all of whom are even fighting the jihadists. In northern Syria, virtually none of the brigades dedicates more than 500 troops to oppose ISIS. Worse, they are increasingly being squeezed out by extremist groups such as Jabhat al-Nusra and Ahrar al-Sham.

One reason behind radical groups’ increasing power is a boost in foreign support. When King Salman of Saudi Arabia ascended to the throne in January, he sought a rapprochement with Qatar and Turkey. They decided to increase aid to the more extreme Islamist factions in northern Syria, who joined to form the Army of Conquest in March. The coalition quickly ejected regime forces from most of the province of Idlib.

King Salman views Iranian expansion from Gaza to Yemen as the greatest threat his kingdom faces. Tehran’s support for the Syrian regime particularly irks him. Unlike Washington, the priority of Saudi Arabia and its allies is toppling the regime, not degrading ISIS. In contrast to the finicky Americans, they do not distinguish between moderate and radical rebels. They open their pocketbooks to any group not named ISIS who is willing to fight the regime.

With the Russians turning Syria into a Middle East Crimea, the troika is sure to double down now. This will likely mean more aid to the radical factions. Washington’s trickle of anti-tank missiles and field rations will be no match for Jabhat al-Nusra’s overwhelming firepower and armor. Al Qaeda will be able to destroy the small FSA factions if it deems them a threat or merely finds them a nuisance.

Former CIA Director David Petraeus recently advised peeling off less hard core Jabhat al-Nusra members, replicating the Sunni Awakening he oversaw in Iraq. There, former Al Qaeda allies turned on the organization. But they did so because the group was muscling in on its economic interests, not out of a love for liberal secularism. In Syria, Jabhat al-Nusra’s objectives loosely align with those of ISIS.

Similarly, former American Ambassador to Robert Ford supports talking with Ahrar al-Sham. Its backers emphasize that it holds more moderate doctrines than Al Qaeda. They note that it protects Western aid organizations active in Syria which would otherwise be shut down by Jabhat al-Nusra. But the organization was complicit in the kidnapping of a Westerner and had chummy relations with ISIS before it was dislodged from Idlib in 2014. Indeed, Ahrar al-Sham only joined the battle against ISIS after it became apparent that locals had turned against the organization.

Making common cause with the radicals will bring Washington no closer to its goal of degrading ISIS. Instead, it will only weaken the regime and precipitate further Russian investment.

Washington should urge the northern FSA brigades to unite. They are too small to survive much longer on their own. Together, the two dozen brigades could face down Jabhat al-Nusra in some areas and avoid paying protection money to move through its zones. The United States also needs to be less rigid in its selection process. Fighters who were accepted into the Pentagon program were later dismissed because they would not sign a pledge to exclusively fight ISIS. However, some returned to Syria where they died fighting it. Moreover, Washington must begin supporting moderate Islamist rebels. In the Arab world, secularism simply does not hold the same allure as in the West. Rather than looking for partners who hold the same values, Americans should seek out those who share the same interests. Until Washington does so, Russian and radical groups will continue to grow deeper roots in Syria. And as they do, ISIS gleefully watches from the sidelines as it does the same.