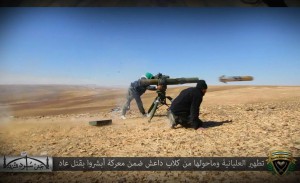 Syrian rebels with ties to al-Qaida are crediting a recent military victory to American missiles which were supposed to aid “moderate” forces fighting Bashar al-Assad.

Anti-tank TOW missiles gave the rebels a vital edge in fighting in the Syrian city of Idlib and surrounding areas during the past six months.

“Nobody can deny the big effectiveness of the TOW missiles on the ground. These missiles are one of the main factors that led to the successes of the rebels,” former Syrian army colonel Ahmed Al Soud, who works with a battalion of the free Syrian army, told a pro-rebel news outlet.

On Sept. 9, a coalition of Islamic Jihadi groups led by the Al Nusra Front and calling itself the Army of Conquest, crowned themselves victorious and the rulers of the city. Al Nusra is al-Qaida’s official branch in Syria.

The use of American weaponry to help radical jihadists marks yet another failure in America’s Syria policy.

Last week, the U.S. Central Command’s top general in the war against ISIS admitted that $42 million spent training moderate forces for the fight has netted four or five Syrians who are on the battlefield, Officials hoped to train 5,400 Syrians in one year.

In Idlib, the man entrusted with U.S. TOW missiles, Gmal Marouf, led the Syrian Revolutionary Front and Hazm Movement. Both were considered moderate and were supposed to use the weapons against Assad forces.

But as Al Nusra tightened its group around the Idlib region a year ago, many of Marouf’s Revolutionary Front forces defected and may have handed the missiles to al-Qaida-linked group.

Marouf since has left Syria for Turkey.

It’s not clear why the U.S. trusted him in the first place. In a January 2014 Twitter post, Marouf wrote that his group, Al Nusra and other jihadist militias “are all in the fighting front together against the regime.”

The consequences for the people of Idlib are severe.

Christian residents who were unable to leave are forced to live under Sharia law but they were exempt from Jizya, a tax enforced on Jews and Christians who live under Islamic law. Crosses have been removed from churches, and Christian women are forced to wear the hijab, or head covering. People loyal to the Army of Conquest are roaming the city and harassing women who haven’t covered their heads.