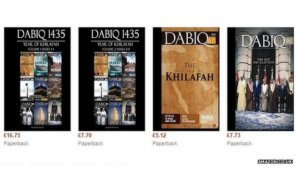 Four different volumes of Daqib, originally launched in 2014, have been available on the U.S., French, German, Italian and Spanish Amazon sites for the past two weeks, according to Daily Mail U.K.

However, Amazon told BBC on Saturday that the magazine, named after a small northern Syrian town mentioned in one of Mohammed’s teachings about the end of days, “is no longer available for sale,” opting not to give give any further details.

Al-Hayat Media Centre, ISIS’ English-language media wing, was listed as author of the publications. Dabiq is one of the many media and propaganda arms operating under Al-Hayat, including two production companies, the ISIS news website, and an Arabic radio station, which began broadcasting in English over the past several months.

It remains unclear how many people are involved in these projects, which rely primarily on English, French, Russian and Urdu-speaking workers.