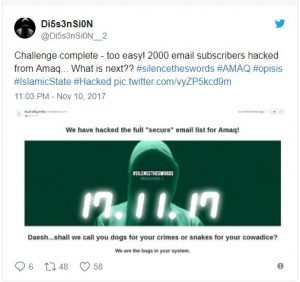 Islamic State’s (Isis) official “news agency” website has reportedly been hacked. A Muslim hacktivist collective, going by the name Di5s3nSi0N, has allegedly claimed responsibility for the attack. The hacktivists have also reportedly leaked the email addresses of around 2,000 Amaq subscribers, like reported by ibtimes.co.uk.

Amaq is widely considered to be Isis’ primary communications publication and reportedly features updates from ongoing battles across the globe as well as propaganda. According to the Independent, just three hours before the attack, Amaq reportedly claimed in an email to its supporters that it had ramped up security after having recently become the target of numerous cyberattacks.

“In response to recent events, we have imposed more stringent security measures on our systems,” the Amaq email said in Arabic. “We can now handle email attacks or any type of hack.”

In response to the claim, Di5s3nSi0N posted a tweet with the message “challenge accepted”. The hacktivists reportedly sent out another email to Isis supporters, with a message reading: “We have hacked the full ‘secure’ email list for Amaq. Daesh…shall we call you dogs for your crimes or snakes for your cowardice? We are the bugs in your system.”

The Independent reported that the email also contained a list of 1,784 email addresses of Amaq’s subscribers, which the publication said it had reviewed and verified. IBTimes UK has not independently verified the email or its contents.

Recently, there have been a slew of hacking attacks by pro-Isis hackers. Over the past few weeks, numerous websites in US and Canada have allegedly been hijacked and defaced to display “I love Islamic State” message. Last week, a Swedish radio station was hacked to play the jihadi recruitment anthem for nearly half an hour.

However, numerous hacker groups are reportedly retaliating against pro-Isis hackers. The Independent reported that hacktivist groups such as Di5s3nSi0N CtrlSec and End of Daesh have recently been hacking websites indulging in Isis propaganda. The hackers have taken to tweeting their exploits under the hashtags # silencethewords, #OpIsis, and #OpIceIsis.

Earlier this year, several cybersecurity experts revealed that pro-Isis hackers had extremely poor technical skills. The hackers affiliated with the terrorist group have previously been involved in website defacement and low-level campaigns, which according to experts, indicates that the hackers have limited coding knowledge.

However, the extremist group’s cyber arm, known as the UCC (United Cyber Caliphate), was recently allegedly found attempting to expand its horizons, even experimenting with malware creation. Meanwhile, hacktivist groups appear to be hitting back at Isis, with one group even attempting to sow discord among Isis members.

The Independent reported that a hacktivist group called Daeshgram has been setting up fake accounts on Isis channels, aimed at delegitimising the terror groups’ propaganda.