You are here: Home / MidEastGulf / All Shiite militias converge on Iraq’s Ramadi against Islamic State 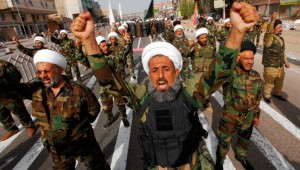 Shiite militia groups converged on Ramadi Monday to help Iraqi security forces wrest the city back from Islamic State fighters who seized it in a deadly three-day blitz.

The effective loss of the capital of Iraq’s largest province was Baghdad’s worst military setback since it started clawing back land from the jihadists late last year.

Days after a rare message from IS supremo Abu Bakr al-Baghdadi urging mass mobilisation, the group came close to also seizing the heritage site of Palmyra in Syria, but the army pinned the jihadists back.

Iraqi Prime Minister Haider al-Abadi, the United States and the leadership of the Sunni province of Anbar had been reluctant to deploy Iranian-backed groups in Ramadi.

They favoured developing local forces, but militia leaders said Monday the past few days had proved the government could not afford to do without the Popular Mobilisation Units (Hashed al-Shaabi), an umbrella for militia groups and volunteer fighters.

Hadi al-Ameri, a key figure in Hashed al-Shaabi and the leader of the Badr paramilitary group, argued Anbar’s leaders should have taken up his offer sooner.

Badr’s TV channel Al Ghadeer said Ameri “holds the political representatives of Anbar responsible for the fall of Ramadi because they objected to the participation of Hashed al-Shaabi in the defence of their own people”.

Various militias announced they had units already in Anbar — including around the cities of Fallujah and in Habbaniyah — ready to close in on Ramadi and engage the city’s new masters.

A spokesman for Ketaeb Hezbollah, one of the leading Shiite paramilitary groups in Iraq, said his organisation had units ready to join the Ramadi front from three directions.

“Tomorrow, God willing, these reinforcements will continue towards Anbar and Ramadi and the start of operations to cleanse the areas recently captured by Daesh will be announced,” Jaafar al-Husseini told AFP, using an Arab acronym for IS.

Ramadi, which lies 100 kilometres (60 miles) west of Baghdad, effectively fell to IS when beleaguered Iraqi security forces pulled out from their last bases on Sunday.

The jihadists used several waves of suicide car bombs to thrust into government-controlled neighbourhoods on Thursday and Friday.

The group’s black flag was soon flying above the provincial headquarters and, with reinforcements slow to come, thousands of families fled the city.

Muhannad Haimour, spokesman and adviser to the Anbar governor, also said fighting was ongoing in some pockets of the city. Iraqi military officials said all main security bases had been abandoned.