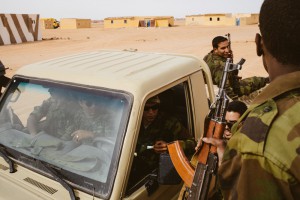 Algerian counterterrorism troops killed two terrorists in the southernmost town of Timiaouine, near the border with Mali, the Defense Ministry said in a statement on Wednesday.

The two gunmen were killed during an ambush by army troops, as a Kalashnikov submachine gun and a quantity of ammunition were retrieved.

Last week, four armed militants surrendered to security authorities in the southern town of In Amenas, near the Libyan border.

Dozens of terrorists have surrendered to army troops due to the underway intense counterterrorism operations in the past nine months, which have killed over 100 armed militants, in addition to destroying bunkers of war weapons and bombs, mostly on southern and eastern borders.

Despite the improving security situation in Algeria, the regions east of the capital, including the provinces of Boumerdes, Tizi Ouzou and Jijel, and also the southern part of the country, namely the provinces of Tamanrasset, Adrar and Illizi, still harbor a few number of terrorists.