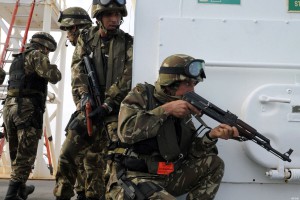 Algerian army troops on Tuesday overnight killed a senior leader of an armed group linked to al-Qaida in the Islamic Maghreb (AQIM), and his assistant in operation conducted in the province of Jijel, APS news agency reported Wednesday.

The senior leader militant is nicknamed Emir Nefla Noureddine, while his deputy is called Bouhnika Abdelouahab, and both joined the terrorist group in 1994.

This operation was “successfully” conducted thanks to “the exploitation of accurate tips,” and allowed to retrieve two Kalashnikov machine guns, a defensive grenade, six magazines and other items, the source specified.

The statement said the operation Tuesday was part of a wide scale dragging operation that is underway since the beginning of the week in the eastern part of the country, which resulted in killing five militants, so far.