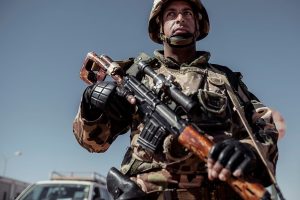 Algerian troops on Tuesday killed nine Islamist militants in an operation in a mountainous region east of the capital that was once the stronghold of al Qaeda, the Defence Ministry said according to reuters.com.

Troops recovered Kalashnikovs, rifles and ammunition in the raid, the ministry said in a statement on APS state news agency.

The operation in Azeffoun, in the Tizi Ouzou region, 60 miles (100 km) east of Algiers, came a day after a militant bomber was shot trying to detonate his explosive belt in a police station in the northeastern city of Constantine.

Militant attacks and bombings have become less common in Algeria since the end of the North African country’s 1990s war against armed Islamists in which more than 200,000 people died.

But al Qaeda’s North Africa branch, Al Qaeda in the Islamic Maghreb, and small brigades of Islamic State-allied militants are still active, mostly in remote mountains and the desert south near the country’s frontiers.

The mountains around Tizi Ouzou were a stronghold for commanders of Al Qaeda in the Islamic Maghreb and previous Islamist militant groups during the 1990s.