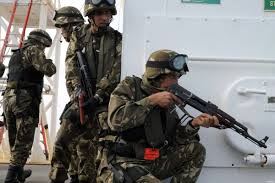 The Algerian army killed four armed militants in the northern province of Ain Defla, who allegedly belonged to a group that carried out a deadly attack on army troops last year, the Defense Ministry said.

They were part of “a bloody terrorist organization which attacked our forces in the same region on July 17, 2015, ” the ministry said in a statement.

Al-Qaida in the Islamic Maghreb (AQIM) claimed responsibility for that attack.