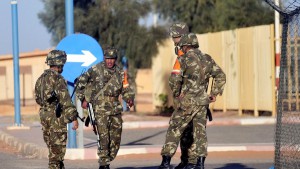 Algerian army killed 16 armed militants affiliated to al-Qaida on Sunday, apparently in response to one of the deadliest militant attacks in months last week that claimed lives of at least nine Algerian soldiers, according to local media.

The army operation was launched to track down a terrorist group affiliated to al-Qaeda in the Islamic Maghreb in the province of Ain Defla, about 145 km south east of the capital Algiers.

The army troops managed to surround the assailants and killed 16 of them, also retrieving a load of arms, local El Khabar newspaper said.

The killed militants were believed to have ambushed an army detachment in the upper woods of Ain Defla on Friday, killing at least nine soldiers and wounding two others, according to the Ministry of Defense. It’s one of the most lethal attacks in months.

Algeria is currently a key western ally in the Middle East region in fighting the Islamic State (IS) group which has controlled swaths of Iraq and parts of Syria.

Both al-Qaida-allied fighters and their rival militants who have declared loyalty to the IS are active in remote mountainous areas across the country.