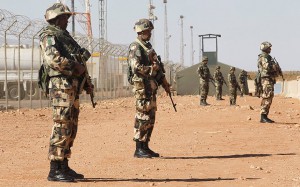 Algerian army discovered on Thursday 18 hideouts used as shelters and bomb workshops by terrorists in the upper hills of the province of Ain Defla, 145 km south eastern capital Algiers, according to a statement issued by the Defense Ministry cited by APS news agency.

The statement specified that the hideouts were discovered following a combing operation of combined security services in the locality of Amrouna in the upper hills of the province.

Last month, army troops killed 16 armed militants affiliated to al-Qaida in the Islamic Maghreb (AQIM) in the province of Ain Defla, in response to the killing of nine Algerian soldiers in an ambush attack in the province.