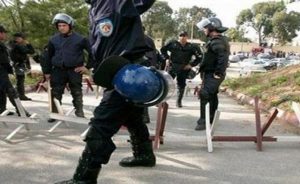 Algerian security forces have announced they foiled an Islamic State group suicide bomb plot on Wednesday, just weeks before the country goes to the polls for a parliamentary election, like reported by alaraby.co.uk.

Police launched a manhunt for two individuals suspected of planning an attack on downtown Constantine, in eastern Algeria.

It ended when one of cornered plotters died as he detonated his explosives’ belt, while the second suspect was captured in Ibn Badis, 20 kilometres from Constantine.

The two individuals are believed to be members of Saraya al-Ghuraba, a local jihadi group affiliated to the Islamic State group.

Security forces say it is a small but dangerous outfit and active in the country’s eastern mountainous region.

Local media named the militant killed in the raid as “Abu al-Haythem”. The second man, who is in police custody, was named as “Abu Suhaib”. Both names are likely aliases.

Security forces said Abu Suhaib is one of the most dangerous militants in Saraya al-Ghuraba.

IS has a small but growing presence in Algeria, but extremist groups linked to al-Qaeda pose a much bigger threat to the security of the country.

Last week, Algeria’s gendarmerie said it dismantled a significant IS recruitment network operating in the capital, arresting seven people including a Tunisian woman.

The Tunisian national is accused of serving as a liaison between new recruits in Algeria and other IS-allied members in Tunisia, a country which has been a hot bed for jihadi sympathisers since the Arab Spring.

Police foiled the plot by opening fire on the bomber who triggered his explosives belt injuring two officers.

Algeria was gripped by an Islamist-tinged insurgency for much of the 1990s, which saw the country torn apart by a brutal civil war that cost as many as many as 150,000 lives.

Algeria managed to regain some stability since then, but the threat of extremism remains high.

Algerians are particularly concerned about a potential spike in violence when the country goes to the polls early next month.