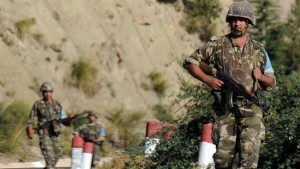 Algerian Defense Ministry said on Sunday that army troops killed a senior terrorist commander in a dragging operation conducted on Friday in the woods of Jijel province, 320 km eastern Algiers.

A defense ministry statement noted that forensics identified the killed militant as L. Abdelkader, nicknamed “Essoudeur,” leader of a terrorist group that committed several heinous acts in the region.

Abdelkader is considered among the first militants who joined terrorist fiefs in 1994.

The ministry also revealed that in the same operation four members of a terrorist support cell were arrested and three terrorist bunkers were discovered and destroyed.

Jijel is a province located in the eastern part of Algeria. It used to be a safe-haven for some armed groups in the nineties. After the government launched a reconciliation process, several militants laid down arms, while a few others are still taking refuge in the region.