You are here: Home / Mediterranean / Algerian army targets militants and smuggling in the south 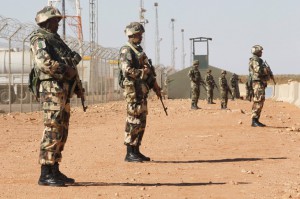 Fearing armed chaos in neighbouring Libya and renewed conflict in Mali, Algeria’s army is shifting focus from fighting militants at home to the Sahel border smuggling that feeds them in the region.

Since last month, the Algerian military says it has arrested more than 650 suspected smugglers on its borders with Libya, Mali and Niger in a campaign to tighten the largely desolate and trackless desert frontiers with the Sahel to its south.

“Algeria’s army is aware that fighting terrorism in the Sahel is useless if you do not include fighting smugglers,” security analyst and writer Anis Rahmani said.

Algeria, a major OPEC oil and gas exporter, managed to neutralise an Islamist insurgency only at the cost of thousands of lives in the 1990s and became a seasoned US ally in the fight against Sahel armed factions.

Anarchy in Libya, has drawn the attention of Algiers and other North African nations to their sprawling, remote border zones. A relapse into fighting in lawless northern Mali has also worried Bamako’s neighbours.

Algeria has sent thousands of troops south since it closed more than 6,000 km (3,700 miles) of its borders with Mauritania, Mali, Niger and Libya in May 2014.

But it has stepped up southern operations in the last few months and increased co-operation with Tunisia on its eastern frontier, where militants operate in border mountains.

Belmokhtar used southern Libya as the springboard for an attack on Algeria’s In Amenas gas plant in 2012 during which militants seized foreign oil workers, triggering a siege that left 40 their captives dead.

Some smugglers recently arrested were armed with Kalashnikovs and others served as scouts infiltrating across the Libyan border for armed groups, the security source said.

The army also seized weapons caches near its borders with Libya, the latest in April consisting of two mortars, two rocket launchers, 45 rockets, and 225 kilogrammes of explosives and landmines, according to the Defence Ministry.

As a sign of the operation’s impact, the price of illicit arms, mostly filtered in from Libya to southern Algeria, has risen, the security source said.

Smuggled items included weapons, gasoline, and foodstuffs that are subsidised by the Algerian government.

But migrant trafficking is an especially lucrative trade with militants cashing in on sub-Saharan Africans and Syrians trying to sneak across the border with Libya to make the perilous sea trip from the Libyan Mediterranean coast to Europe.

Earlier last summer, 200 Syrians were seized by Algerian security forces near the border with Libya as they were trying to reach Italy with the help of Libyan militants who had promised to smuggle them there by boat.