You are here: Home / Mediterranean / Algerian Army eliminates two Islamists near the capital 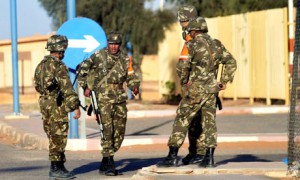 The Algerian Armed Forces downed today two extremists in the province of Boumerdes, located in Kabylie and near this cpaital, a Defgense Ministry communique confirmed.

The source explained that the fundamentalists were shot by a National People’s Army detachment, in the course of an exploration-and-search operation that is currently in progress.

This military action covers the city of Bury Menaiel, around 70 kilometers east from Algiers, and the military men seized an assault rifle and ammunition boxes today.

In recent months, the extremists have increased their actions in several areas in Algeria, a country that suffered a wave of terrorist actions by radical Islamic groups in the ’90s.

Media outlets said that according to the Interior Ministry, security forces killed around 200 fundamentalists, including several emirs (chiefs), who began their counter-Government activities in the aforementioned decade.