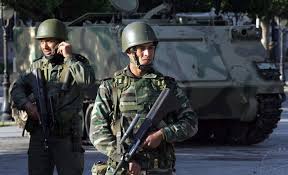 Two terrorists were arrested and two others were killed in November by units of the People’s National Army, in addition to the surrender of seven other terrorists and the arrest of ten individuals supporting terrorist groups.

“As part of the fight against terrorism and organized crime and measures to strengthen border security, two terrorists were arrested and two others were killed, while seven others surrendered,” said a toll of Army operations in November 2016.

In addition, “ten individuals supporting terrorist groups were arrested and 40 bunkers were discovered and destroyed,” said the toll.

According to the same source, 72 homemade bombs and a workshop for explosives manufacturing were destroyed while 34 Kalashnikovs, 11 pistols of various calibres, 11 rifles, 40 magazines and 350 cartridges were seized.

Besides, 3 kg of explosives and 27 detonators were destroyed and 25.56 quintals of chemicals used in explosives manufacturing were seized.

Army units also recovered one rocket launcher and 17 rockets while 2,164 mine dating back to the colonial era were destroyed.

With regard to the efforts made by the Army as part of the fight against smuggling, 139 smugglers have been arrested.

Moreover, the Army forces arrested “51 drug traffickers and killed another. They also seized 113 quintals of cannabis resin and nearly 3 kg of cocaine” and “1256 psychotropic drugs.”

This report “reinforces the determination of the Army forces to thwart any attempt aiming at destabilizing the country,” the same source concluded.