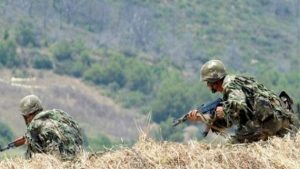 Two Islamic terrorists were killed Saturday in Djbel El Ouahche in the province of Constantine thanks to the efficient exploitation of information and following an ambush laid by a detachment of the People’s National Army (ANP), the National Defence Ministry announced in a communiqué.

“As part of counterterrorism and thanks to the efficient exploitation of information, an Army detachment laid an ambush in the evening of Saturday 25 March 2017 in the area of Djebel El-Ouahche in Constantine (5th Military Region) and eliminated two terrorist, including the dangerous wanted criminal L.Noureddine, alias Abou Al Hammam who joined terrorist groups in 2008 and perpetrated many crimes in the region, as well as terrorist F.Bilal,” said the source.

“One Beretta automatic pistol and a quantity of ammunition were recovered,” according to the same source.

“This quality operation confirms the efforts made by the Army for the chase of small terrorist groups and their elimination countrywide to clean up the holy land of Algeria and to establish security and serenity among our fellow citizens,” the Ministry concluded.