You are here: Home / Mediterranean / Algeria: total of 157 terrorists, including 10 terrorist leaders killed in 2015 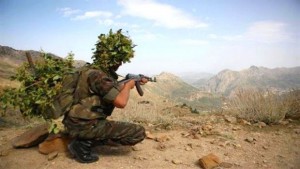 A total of 157 terrorists, including ten leaders who had joined terrorist groups since 1994, were killed in 2015, said the annual operational report of the People’s National Army and security forces, published Saturday by the Ministry of National Defence.

The report shows the efforts conducted in line with the directives of the Army high command in order to intensify the fight against the remains of terrorist groups and ensure constant vigilance to counter any threat to the security and stability of the country, said the report.

The year 2015 was marked by unprecedented results in the fight against terrorism, organized crime, smuggling, and weapons and drug trafficking, by the elimination and the arrest of a great number of terrorists, the breaking-up of many terrorism support networks and the destruction of many caches and bunkers serving of refuge for terrorist groups, added the report.

These operations, conducted and coordinated between the different units of the Army and security forces, also allowed the arrest of a great number of smugglers and the recovery of huge quantity of weapons, ammunition, drugs, fuel and prohibited goods.

These results also reflect “the commitment of the Army high command to thwart the evil designs of these criminals and show the professionalism, vigilance and determination of our armed forces to protect the supreme interest of the country and the sovereignty of the national territory,” added the report.

The various operations conducted by the Army and security forces units, as part of the fight against terrorism, allowed the arrest and the elimination of 157 terrorists, including ten leaders who had joined the terrorist groups since 1990.

“The discovery and destruction of 548 caches and bunkers for terrorist groups, most of them in the 1st and 5th military regions,” added the report.

A huge quantity of ammunition, pairs of binoculars, mobile phones, GPS devices and other objects were also seized by Army units.

As part of the measures to strengthen border security and fight against drug trafficking, detachments of the Army and security forces arrested 1,514 drug traffickers, of whom 53 of foreign nationalities, and seized 128.136 tonnes of drugs and a huge quantity of psychotropic drugs.

As part of fight against smuggling and organized crime, units of the Army and the different security forces arrested 2,076 smugglers, including 543 of foreign nationalities, and 1,977 gold diggers, most of them (1,274) of African nationalities, said the source.

During the same period, “over 3,880,564 litres of fuel intended to be smuggled, 1,722 metal detectors, power generators and pneumatic drills were seized,” said the report.

Detachments of the Army and security forces also seized more than 1,000 trucks and vehicles, including 171 all-terrain vehicles and 65 motorbikes,” added the source.

During the different operations of fight against illegal migration, the coastguards thwarted illegal migration attempts of 1,500 people and units of the Army and border guards arrested 2,718 illegal immigrants, most of them of African nationalities,” said the report.