You are here: Home / Mediterranean / Algeria to build wall around libyan border to keep ISIS out 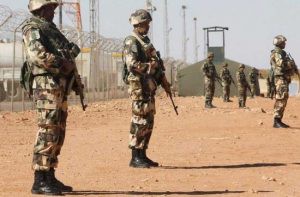 According to Libyan media, Algeria has been planning on constructing a wall 120 kilometres long along its border with Libya.

Algeria has been stepping up its security measures in pursuit of countering terrorism within its borders. The wall will be three meters high with barbed wire lined along the wall. Algeria is hoping that this wall will keep out ISIS and weapons smugglers crossing through Libya’s desert.

Reports of this nature were spreading last year, however, the Algerian government made no effort to begin building the wall. Recent increases in kidnappings and attacks by armed groups and criminals has given a sense of urgency to begin the building of the wall.

Geoff Porter, president of North Africa Risk Consulting, said Algeria is trying to avoid having to trespass “on another sovereign territory” in hopes of protecting its nation instead of being actively engaged in eliminating external threats.

The Tunisian government said it also plans to construct a fence about 160 kilometres long along its borders with Libya in hopes of keeping ISIS out of Tunis, especially after the terrorist group attacked a beach resort in Sousse and a museum in Tunis in 2015. Reports have indicated that the ISIS criminals who carried out the attacks in Tunis were trained in Libya.