A suicide bomber detonated himself outside a police station in Constantine, but was shot dead by an alert officer 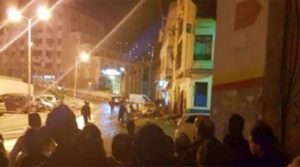 Several police officers were reportedly injured after a suicide bomber detonated himself outside a police station in the eastern Algerian city of Constantine on Sunday (26 February) evening, like reported by ibtimes.co.uk .

Algerian state news agency APS and local media sources reported that the attacker was shot dead before he could enter the building. The area is currently under lock down as an investigation has been launched.

According to Reuters, Algerian Interior Minister Noureddine Bedoui reportedly confirmed the attack to state television, but declined to give further details. He wished a quick recovery to the wounded officers, without giving any specifics.

The dead militant was known to the police and was implicated in another attack in which a police officer was killed, RT News wrote, citing Sky News Arabia.

The Directorate General of National Security said that the alert officer was “precisely targeting the explosive belt carried by the terrorist”. The police service also said that the casualty could be higher as the police station is located beneath a building that houses “a dozen families”.