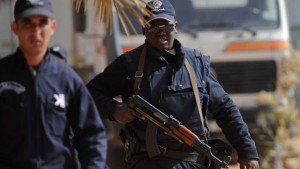 The Algerian Defence Ministry says its security forces have killed a “dangerous terrorist” active since 1995 in an eastern region near the border with Tunisia.

A ministry statement on Wednesday said that Bakari Ali, whose nom de guerre was Abou El-Hacen, was killed a day earlier in the Tebessa region. Weapons including an automatic pistol and a Kalashnikov were seized along with munitions, explosives and portable phones.

The statement said El-Hacen and his wife joined extremist groups in 1995 in the eastern region before heading to the Sahel in 2000, “becoming one of the acolytes of terrorist Moktar Belmokhtar” – the militant who claimed responsibility for the 2013 gas plant attack in southern Algeria in which 37 workers, all but one of them foreigners, were killed.