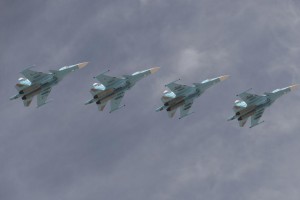 The Algerian Air Force has ordered 12 Su-34 Sukhoi Russian fighter jets as it looks to upgrade from its antiquated Soviet-era Su-24s. While the value of the deal for the jets has not been announced, it is part of a larger $7.5 billion weapons deal with Russia signed in 2006 and ends nine years of negotiations between Algiers and Moscow, according to General Chkalov Sergei Smirnov, director of Novosibirsk Aircraft Production Association, the government-owned company that manufactures the aircraft.

The Su-34 was recently used in the Russian bombing campaign against the Islamic State group in Syria, an opportunity for perspective buyers to see it fly in a true operational environment.

“Several countries in Africa, including Uganda and Nigeria, which [are] waging a war against Boko Haram, could buy the Su-34,” said Korotchenko, according to a Defense News report published late Wednesday. “Such top of the range fighter bomber aircraft could also strengthen Ethiopia’s Air Force, which still operates a large fleet of aging Su-27 fighters.”

To help pay for its $400 billion military technological advancement and growth program, the Russian government had been selling to countries it did business with before the fall of the Berlin Wall in 1991 and to countries that could not afford the more expensive western defense products being sold by the U.S. and European countries. To that end, Moscow made big deals with India, China, Iran and countries in the Middle East during 2015.

While Africa is a market that has traditionally not generated big revenues, it is being seen as a future battle ground for defense companies. The U.S. And Europe are less inclined to sell to unstable regimes where the government could turn on the civilian population using the weapons it bought, whereas Russia had shown in the past that it is more than comfortable selling to any country.

The Su-34 has also attracted the interest of Iraq, Uzbekistan and Turkmenistan while Kazakhstan already operates a squadron recently acquired from Russia.