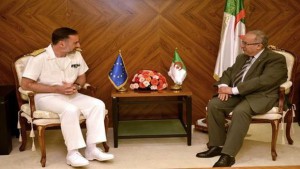 “EU has established an agenda on the migration in ten points. We are working in a comprehensive approach to face the issues of migration. I am here to explain my mission and listen to the Algerian concerns and proposals about this issue,” said Rear Admiral Enrico Credendino, in a brief statement to the press at the end of the audience granted to him by Lamamra.

This visit “is part of a tour which aims at informing the countries of the nature on the nature of the missions assigned to this operation launched in June 2015 to fight against migrant trafficking networks in the Mediterranean Sea,” said Foreign Affairs Ministry in a communiqué.

The visit shows “the importance given by the European partner to the position and role of Algeria in the region and also the commitment of our country to the virtues of dialogue and consultation to take up the common challenges,” according to the source.