You are here: Home / Analysis / Algeria preparing for return of foreign fighters with efforts to fight terrorism 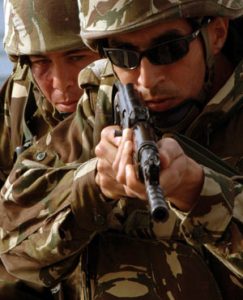 The threat of the return of foreign fighters to the North African and Sahel regions after the defeat of Islamic State (IS) in Syria and Iraq, obsesses Algeria as neighboring countries like Libya, Niger and Mali are still suffering security instability, which could constitutes safe heaven to those foreign fighters, like reported by xinhuanet.com.

In Algeria, security services have been dismantling several networks specializing in transferring young recruits to IS strongholds, particularly in Syria via Turkey. Meanwhile, terrorist groups affiliated to IS have been inflicted heavy losses by army troops in recent years, as they became helpless.

But today, another obsessing issue is emerging, as a UN report warns that Some 6,000 African fighters, who joined IS camps in Iraq and Syria, could return home and poise threat to the region, especially in case they join other armed organizations activating in the Sahel region, including in Libya and northern Mali.

At the first meeting of the Global Counterterrorism Forum’s Capacity-building in the West Africa Region Working Group held in October 2017 in Algiers, Algerian Foreign Minister, Abdelkader Messahel said the risk of the return of foreign terrorist fighters to the African Sahel after the losses inflicted by international coalition to IS in Syria and Iraq, seems to be the main terrorist related challenge that faces the region.

Messahel suggested reinforcing border security cooperation and improving living conditions of the region’s population, including youngsters, to deter them from joining terror groups in exchange of money.

He further underlined the importance to dry financial sources for terrorist groups, including ransom payment, as well as drug and arms trafficking, which provide huge sums of money to these groups, making them more powerful.

In an interview with Xinhua, professor of political science at the University of Algiers, Dr. Ali Rebidj, noted that all indicators show that Libya looks the safe haven for potential returning of the thousands of IS foreign fighters amid chaos reigning there, because other countries of origin of these foreign fighters, such as France and Belgium, as well as Tunisia, Morocco and Algeria, reject to host them.

Dr. Ali Rebidj considered that the danger lays in the resurrection of IS in Libya, as coordination of African intelligence services with foreign counterparts is vital to thwart this threat.

Algerian FM urged in Oct. 2017 to strengthen border security measures to stop all forms of foreign fighters’ movement, as he called on Sahel countries to set regional and international cooperation in a bid to develop approaches to address this scourge and block the attempts to the concentration of these militants in areas that lack resources and means to fight them.

Algeria is struggling to secure its borders to prevent the intrusion of armed groups and the establishment of new terror cells in its territory.

Earlier this month, a court in Boumerdes province, 60 km eastern Algiers, condemned three young men, who were arrested in 2017 in the Airport of Algiers, of attempting to join IS as they were holding false passport. Two of them were sentenced to three years.

Attempts of young Algerian men to join IS in Syria is due to weakening of IS-affiliated group in Algeria, namely “the Caliph Soldiers” after counterterrorism troops managed to eradicate it in its cradle in 2014, thanks to the killing of its senior officials, including Abdelmalek Gouri in Dec. 2014, who was behind the kidnapping and execution of French tourist, Herve Gourdel, in Sept. 2014.

Other senior members of Caliph Soldiers were continuously killed, such as Osman al-Assami in May 2015, Abu Dujana and his assistant in Oct. 2016, and Ahmed Houari in March 2017.

According to political analyst and military expert, Lakhdar Saoud, Algerian security services have gained considerable experience in the field of the fight against terrorism in the past 25 years.

Professor Saoud told Xinhua that the parties that are working to bring in IS to Algeria are planning to assemble the foreign fighters in the Sahel region in general, and in Libya in particular, ahead of forming terrorist groups made of foreign fighters and new local recruits, in a bid to weaken the state and sow chaos, through exploiting the current financial crisis hitting the North African nation.

Yet, the analyst stressed that these foreign parties are aware that Algeria is aware of this plot, and its security services are working to counter this potential threat.

According to a report issued in 2017 by the American Center for African Affairs, Algeria was able to eliminate the organization of IS-affiliated group in its cradle, but it is still facing the danger of the remnants of the al-Qaeda in the Islamic Maghreb (AQIM) led by Abdelmalek Droukdel, alias Abu Musaab Abdelouadoud, which is activating particularly in eastern and southern Algeria.

Experts said Africa, like many other regions of the world, is the target of ongoing terrorist threat after that this trans-border scourge managed to “exploit human misery in some areas, and penetrate social media platforms via Internet to recruit young people in Africa.”

These developments urged African heads of state and government to establish a coordination mission to prevent and combat terrorism in Africa under the supervision of the African Union.

Algeria is a founding member of the Global Counterterrorism Forum, and has already hosted expert-level meetings in 2016 to discuss topics related to the role of criminal justice in the fight against terrorism.