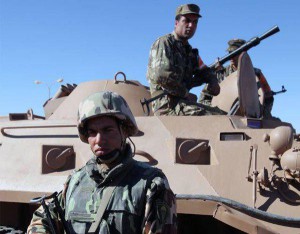 Eleven men were arrested by the National Gendarmerie for their affiliation to a terrorist group, the Ministry of National Defence said in a statement.

“As part of the fight against organised crime, detachments of the People’s National Army intercepted five smugglers, seized a Kalashnikov submachine gun, a quantity of ammunitions and explosives,” the statement said. The men were captured in Sidi Bel Abbes.

Coastguards also thwarted an illegal migration attempt of 11 people aboard a makeshift boat in Annaba, east of Algeria, while 14 illegal immigrants were arrested in the cities of Illizi and Adrar, the statement added.

Earlier this week Algerian forces intercepted a terrorist cell in Batna where homemade bombs were being made. Seven men were arrested.

The North African country joins Morocco and Tunisia in seeing an increase in home grown terrorists as the region becomes more susceptible to Daesh-inspired attacks. Training in Libya, many Daesh fighters then attempt to enter neighbouring Algeria and Tunisia to carry our similar operations and training.