You are here: Home / Mediterranean / Algeria, incapable of protecting its borders from Islamic terrorists 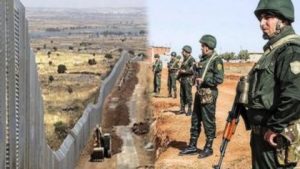 The Group, specializing in security studies, noted that Algeria is unable to control its borders with Libya, Tunisia and Mali where Jihadists have shown capacity to infiltrate the borders and conduct attacks on Algeria’s strategic targets.

Algeria, Africa’s largest country, shares borders with six countries, all of them are closed with the exception of its land frontiers with Tunisia.

This closed-border attitude is reflective of a lack of a neighborhood policy in an increasingly integrated continent where collective efforts are the best means to countering trans-border challenges.

Experts have long insisted that fighting terrorism in the region should be a collective endeavor as national approaches have long proved their inefficiency.

Yet, there is a silently brewing lack of trust between Sahel countries and Algeria on the issue of terrorism. Algeria, the native land of the leaders of most terrorist groups operating in the Sahel, has shown ambivalence in tackling the terrorist threats, which feeds suspicions and erodes trust in Algeria’s willingness to combat terrorism.

The connivance of Algeria’s intelligence services with Algerian national Moukhtar Belmoukhtar, aka Mr Marlboro, is no secret. International reports have also accused Algeria of cooperating with Ansar Eddine and its leader Ag Ghali to quell the separatist ambitions of the secular Azawad movement. Algeria’s support for Ag Ghali was intended to foster extremism in the region to avert a spillover of an independent Touareg state on its own Touareg population.

Algeria’s laxism with Ag Ghali facilitated the merger of four terrorist groups operating in the Sahel into one group pledging allegiance to Al Qaeda and its Jordanian leader Azarkawi. The four terrorist groups were brought together under the command of Ag Ghali. The new terrorist organization bears the name of “Jamaât Nasr Al islam wa Al mouminin” (Group for the Defense of Islam and the Muslims).

The creation of the G5 has also infuriated Algerian political leaders. It is no coincidence that the anti-Sub-Saharan migrant rhetoric is on the surge following the formation of the G5 force.