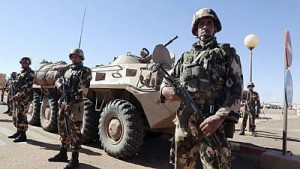 Algerian forces have cleared out Daesh-affiliated militants from the mountains east of Algiers, two years after they kidnapped and beheaded a French tourist in the former Al Qaeda stronghold, senior security sources said.

Algeria, emerging from a 1990s war with armed militants, has been carrying out operations to flush out remnants of militants from Jund Al-Khilafa, or “Soldiers of the Caliphate,” who had declared themselves allied with Daesh.

Bombings and attacks are rarer in Algeria since it ended its decade-long war, but Al Qaeda in the Islamic Maghreb is still active and a small group of rival militants tied to Daesh also began operating east of the capital.

Algeria’s clearing out Daesh allies comes as the group battles to hold its North Africa base in the Libyan city of Sirte.

Tunisian militants with Daesh in the Libyan city of Sabratha were hit by a US air strike in February.

Since Frenchman Herve Gourdel was killed in September 2014 in Algeria, troops have swept through the Kabilye region, a mountainous and heavily forested area once known as part of the “Triangle of Death” during Algeria’s bloody 1990s war.

“The group has been dismantled, most of its commanders were killed or arrested.

It is over,” one senior security source told Reuters, asking his name not be used because he was not authorised to speak to media.

Mopping up Daesh in the north will allow Algeria’s army to focus on southern borders with Libya, Mali and Niger where fleeing militants may try to slip across its frontiers, the source familiar with the operations said.

A second security source said Jund Al-Khilafa has been militarily defeated over the past few months in regions including Bouira, Boumerdes and Tizi Ouzou, all the east of the capital.

Most of its commanders had been killed or arrested and its structure has been dismantled, the source said.

“Most of those killed or arrested in the northern regions of Algeria, including Tizi Ouzou, Boumerdes and Bouira belonged to Jund Al-Khilafa,” the source said.

While security forces pursue Jund Al-Khilafa, Al Qaeda in the Islamic Maghreb (AQIM) has been little visible in the area east of Algiers in the past two years, leading to questions whether AQIM commander Abdelmalek Droudkel fled the region usually considered his base of operations.