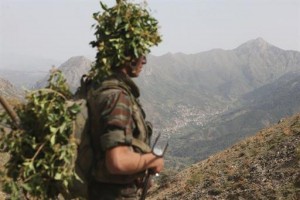 A detachment of the National Popular Army (ANP) special troops killed one terrorist and recovered ammunition, following an ambush on Friday in Sidi Bel Abbes (west of Algiers), said Saturday a statement from the Ministry of National Defence (MND).

“Following the exploitation of information, a detachment of special troops of the National Popular Army (ANP) under the operational area of Sidi Bel Abbes (2nd military region) killed one terrorist, on 28 August 2015 at 4:00 PM, at the locality of Moulay Slissen,” the source added.

“The dangerous criminal is named Abdou Chikh, nicknamed Talha, having joint the terrorist groups in 1993,” the source indicated while noting that  “the operation resulted in the recovery of one Kalachnikov machine gun and two loaded chargers.”

On the same day, and in separate operations, 64 smugglers of African nationalities were arrested in Bordj Badji Mokhtar and In Guezzam (6th Military Region) by members of the National Popular Army (ANP), who also seized a car and quantities of products for smuggling, the statement said.