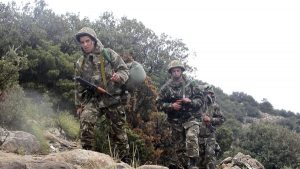 The nine terrorists eliminated in Bouira on Friday 17 February 2017 during a combing operation carried out by the combined detachments of the People’s National Army ANP, have been identified, said the Ministry of National Defence in a statement reported by aps.dz.

“Nine of the fourteen terrorists eliminated during the quality operation conducted by combined detachments of the Army near the commune of El Adjiba, in the province of Bouira (1st Military Region) have been identified as:

– A. Djamel (alias Chouaib), who joined terrorist groups in 2006

The quality operation, which is still ongoing, has resulted so far in the elimination of 14 terrorists and the recovery of 13 weapons, a quantity of ammunition and other objects, said the statement.