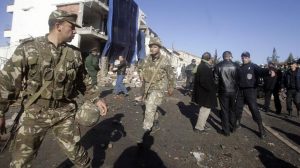 Four Islamic militants were killed in a violent clash in the Skikda region, some 260 miles east of the capital city of Algiers, Algeria’s defense ministry said.

Meanwhile, local police and a military official in Algiers said seven soldiers were also killed in the skirmish that occurred Monday in the locality of Bessi during a search and sweep operation.

The police and military sources, who spoke on condition of anonymity as they weren’t authorized to speak publicly to journalists, said the dead soldiers’ bodies were taken to the local morgue and several other wounded soldiers were treated in the Skikda hospital.

The ministry confirmed the “elimination” of four “terrorists” in which the military recovered three machine guns — but did not comment on the soldiers’ deaths.

The Skikda region was a former stronghold of armed groups during the 1990s and is known for its mountainous and wooded terrain. It has not seen militant violence in several years.