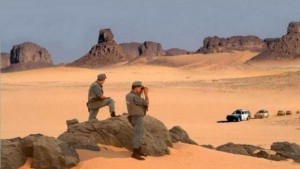 Seven Libyan terrorists have been arrested Tuesday in Hassi-Kiout, in the province of Illizi (1850-km southeast of Algiers), by a detachment of People’s National Army, from the north-east operational section of In-Amenas, the fourth military district in Ouargla said in a statement.

The Army has also seized a number of arms: four automatic rifles (Kalashnikov), four pump-action shotguns, and a precision rifle, in addition to a quantity of ammunition, a pair of binoculars and two battle dresses, the statement disclosed.

Three all-terrain vehicles were also recovered during the operation, according to the statement.

Investigations have been launched into the case as part of the efforts to fight against terrorism, smuggling, organized crime and illegal immigration.