You are here: Home / Mediterranean / Algeria: 63 of Its Citizens With Islamic State 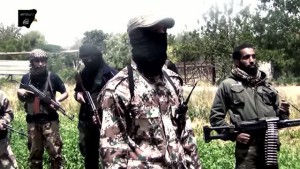 Algeria’s minister of religious affairs says only 63 of the country’s citizens have joined the extremist Islamic State group, in stark contrast to its neighbors.

In remarks carried in the media Wednesday, Mohammed Aissa said the figures came from Interpol and noted that less than 1 percent of IS members were Algerian.

Neighboring Tunisia and Morocco are among the biggest source of recruits for the group, with an estimated 3,000 and 1,500 coming from each country, respectively.

Experts have attributed the low numbers to vigilant internal security, homegrown extremist groups and a general fatigue with fighting following the civil war in the 1990s.

In the past several months, Algerian forces also announced several victories against a local group allied to IS which killed a French hiker.