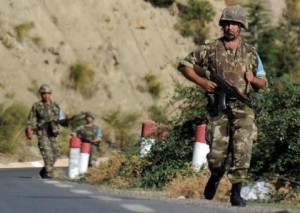 Fourteen people supporting terrorist groups were arrested by detachments of the People’s National Army (ANP) coming under the 5th Military Region, while sixteen (16) caches, which served as shelter for terrorists, were destroyed in Tizi Ouzou, according to a communiqué of the National Defence Ministry released on Tuesday.

“As part of fighting terrorism and organized crime, and thanks to the use in information, detachments coming under the 5th Military Region arrested fourteen (14) people supporting terrorist groups,” said the source, adding that another detachment “discovered and destroyed sixteen (16) caches which serve as shelter for terrorists in Tizi Ouzou (1st Military Region).”

“A detachment of the People’s National Army coming under the operational sector of Djanet (4th Military Region) and following a search operation in the locality of Tin Ezzouj, located between Djanet and In Guezzam, arrested on 23 November 2015, four (04) criminals of different African nationalities and seized three (03) Kalashnikov submachine guns, a quantity of munitions, five (05) all-terrain vehicles and mobile phones.”