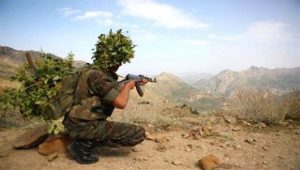 A terrorist surrendered to the Algerian military in the southernmost province of Tamanrasset, said defense ministry in a statement according to xinhuanet.com.

Another armed militant was shot dead Tuesday in the northern province of Ain Defla, the statement said.

“In the context of the fight against terrorism and following an ambush set up in the woods of the province of Ain Defla, counterterrorism troops shot dead a terrorist and retrieved his Kalashnikov-type machine gun and a quantity of ammunition,” said the statement.

A terrorist laid down his arm on Wednesday morning to the military authorities in Tamanrasset, near the border with Mali and Niger, as he had in his possession a Kalashnikov-type machine gun and a loaded magazine, it said.

A week ago, five armed militants also laid down their arms to military authorities.

Algeria has deployed tens of thousands of troops on the southern and eastern borderline, in a bid to thwart the intrusion of terrorists and arms, amid instability reigning in Mali and civil war hitting Libya.

The North African nation has also opened safe routes along its southern border, to encourage Algerian militants who joined terrorist fiefs in the Sahel, to lay down arms, in exchange of fair trials.

The statement further noted that counterterrorism troops in the eastern province of Skikda discovered and destroyed two terrorist bunkers containing 700 kilograms of chemicals used in the manufacture of explosives, three homemade bombs, detonation tools, and foodstuffs.