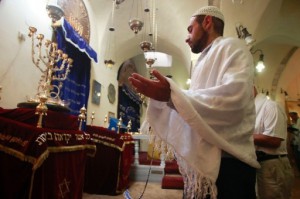 The last Jewish family has left Aleppo, according to sources in northern Syria, ending a long and illustrious chapter in the diverse demographic and religious history of the city that is now torn by war due to almost five years of a vicious conflict.

Chances are that Aleppo Jewry will never return as the city remains at the crosshairs of an ongoing war between Syrian troops, Russian airplanes, and a large variety of rebels fighting on Syrian soil.

The family was that of Mariam, a salt-and-peppered haired feeble 88-year old Jewish grandmother, born in Aleppo during a military uprising against French colonial rule in 1927. Childhood memories of foreigners running around her city with their light arms would have remained vividly imprinted in her mind — Frenchmen, Brits, Turks, Nazi Germans, Indians in the British Army. All of them passed through Aleppo at some point during her life in the city, either right after the First World War or throughout the Second.

More recently so have Chechens, Tajiks, Saudis, Jordanians, Iraqis, Moroccans, and a colourful assortment of European Islamist radicals who have all flocked to join Daesh.

As Daesh closed in on Aleppo earlier last summer, Mariam’s nerves collapsed. Fearing slaughter at the hands of Abu Bakr Al Baghdadi’s men, she nodded helplessly when her two daughters showed up saying that they must leave Halab — as the city is known in Arabic and Hebrew — immediately.

An Israeli-American tycoon named Moti Kahana stepped in with a mission to get the city’s last Jews out. Israel has in the past run secret operations to get Arab Jews it perceives to be in danger out of their countries.

With very little luggage, Mariam sluggishly boarded a minibus provided by Kahana with her two daughters Gilda and Sarah, a single woman in her 40s, and all of her grandchildren. Present with them was Khalid, the Muslim husband of Gilda. All the women wore the Muslim headscarf — the hijab, to avoid arousing unnecessary attention at Islamist checkpoints. They waited for the guns to go silent at noon prayer then whizzed through the streets of Aleppo, driving through debris and dead bodies, crossing checkpoints manned by the Al Qaida-affiliated Al Nusra Front and Daesh. It took them 36-long hours to reach safety at a small apartment in Istanbul, where Moti Kahana was waiting for them.

Kahana was very proud of his feat — himself a loud opponent of the Syrian regime who posts online photos of himself carrying the green tricolour of the Syrian uprising. According to Kahana’s own account of the story, since no member of the Syrian Jewish family agreed to speak to the press, only Mariam and Sarah were allowed safe passage into Asqalan (Ashkelon), where they have now settled.

Gilda and her family were turned down because her husband was a Muslim and she had converted to Islam three years ago, in keeping with Israeli law that only allows naturalisation Jews. The Muslim members of the family were told to stay in Turkey but they refused, preferring to return to their war-torn country than live in refugee camps.

After a painful separation from her aging mother, Gilda returned to Aleppo with her Syrian passport, and now lives there in silence with her Muslim husband and children, refusing to ever comment about the entire ordeal. Moti Kahana was the person to break the story, saying: “I got the last Jewish woman out of Aleppo. I feel very emotional when I think about it.”

Just 15 years ago, there were approximately 200 Jews living in Syria, a small number compared to the country’s then-population of 23 million. The number dropped significantly over the past decades, once standing at 15,000 during the short-lived Syrian-Egyptian Union (1958-1961). In 2000-01, 150 Jews lived in Damascus while the rest were divided between Aleppo and Qamishli in north-eastern Syria.

According to the US annual International Religious Freedoms Report, the number of Jews inside Syria had dropped to no more than 80 by the year 2005. Last December, various sources put the number at approximately 50 Jews, mostly living in Hay Al Yahud (the Jewish Quarter) within the walled Old City of Damascus, side-by-side with Shiites.

The Jewish community of Aleppo was once a powerful and wealthy one, well-connected in overseas trade and deeply rooted in the city’s ancient history. As early as 1901 they established the Aleppo Jewish Community Synagogue in occupied Jerusalem and bankrolled Syrian Jewish migrants who fled to the Americas during the First World War.

Aleppo was considered the unofficial capital of Sephardic (eastern) Jews and according to popular lore the city’s Grand Synagogue was erected by one of the Biblical King David’s generals.

The community started to gradually to lose influence and leave Aleppo, either to Israel or to Brooklyn, New York after 1948, when their homes and synagogue were attacked by hoodlums during the first Palestine War.

One of its celebrated figures was Yom Tov Assis, an Aleppo-born reputed historian who now teaches at the Hebrew University in occupied Jerusalem and chairs its centre of Aleppine Jewry, an institute dedicated exclusively to studying the city’s Jewish community.

Sami Moubayed is a Syrian historian and former Carnegie scholar. He is also author of ‘Under the Black Flag: At the frontier of the New Jihad’.