You are here: Home / MidEastGulf / Aleppo: Russian boots on the ground 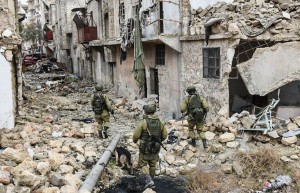 The Russian Ministry of Defense has published sobering images of eastern Aleppo after what they describe as its ‘liberation’.

The pictures show Russian military engineers and de-miners working in an abandoned city. Singed shells of cars, collapsed multiple storey buildings, and a collection of rockets, mortars and mines leave little doubt as to the hellish nature of existence during the final days inside this anti-Assad enclave.

It was reported that 80,000 people remained trapped in these districts during the last days of intense bombardment in November and early December.

The city was finally taken by Russian-backed forces in the second week of December. According to the U.N., over 400,000 people died in Aleppo during the 5 years and 9 months of fighting. At least 463 civilians, and 62 children, were killed in the eastern districts since mid-November alone, says the Syrian Observatory for Human Rights.

Russian military support, firepower and planning were central in Assad’s assault on the city. For much of the battle, the Russian authorities, and sympathetic news stations, asserted that only ‘terrorists and their sympathisers’ remained behind in the eastern part of the city. This was disputed by other regional powers, including Turkey.

There have been reports of war crimes on both sides, but particularly by advancing regime forces. The U.N. Secretary General Ban Ki-Moon highlighted ‘credible’ cases of over 80 alleged executions of civilians by regime forces in the hours and days after rebel forces left the city. The evidence the U.N. claimed to have suggested that they were killed using handguns.

Both Russia and the Assad regime have denied the executions.

A nationwide ceasefire, brokered between regional powers Turkey, Iran and Russia, took effect on December 30. The ceasefire agreement does not cover groups deemed to be terroristic, including the Al-Qaeda associated Nusra Front and ISIS.