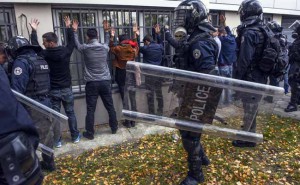 Eleven people suspected of plotting terrorist attacks and recruiting for the Islamic State (IS) were detained in Albania and neighbouring Kosovo, officials said Sunday, AFP announced.

Police in Albania said they detained four people on Saturday on suspicion of financing terrorism, recruiting IS fighters for Syria and spreading “terrorist propaganda”.

In Kosovo, seven people were also arrested Saturday for what police described as “terrorism” and a threat to public safety.

Media reports said the detainees were alleged IS members and, working under the jihadist group’s leader for Kosovars in Syria, Lavdrim Muhaxheri, planning to stage terrorist attacks in the Balkans.

The prosecutor’s office in Kosovo, in remarks reported by news portal Insajderi.com, said the seven had links to other jihadists across the Balkans.