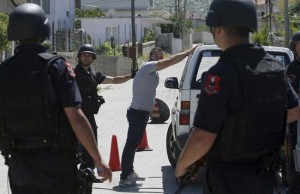 Albanian authorities say they have extradited to Italy an Albanian accused of recruiting for the Islamic State group in Syria.

A police statement said that 40-year-old Baki Coku, who was arrested in July on an Italian request, was flown to Italy.

Italian authorities accuse Coku of being part of a recruiting ring that included his nephew, Aldo Kobuzi, who allegedly underwent weapons training in Iraq with Islamic militants.

Among the people allegedly recruited were Kobuzi’s Italian wife, Maria Giulia Sergio, who converted to Islam, allegedly became radicalized and went to Syria.

Italian anti-terrorism police have arrested other relatives of the married couple who were allegedly trying to persuade family members to join IS in Syria.