You are here: Home / MidEastGulf / Alarm as thousands of Islamic State fighters in Syria, Iraq ‘missing’

Several Arab and Western espionage agencies have set up a joint situation room to trace thousands of Islamic State fighters who have gone missing in Syria, Iraq and Libya, an Arab intelligence official told Breitbart Jerusalem 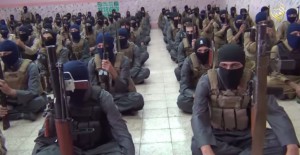 Some of the several hundred IS fighters who took part in the battle of Sirte, in Libya, survived the defeat, as well as fighters in the lost battles of Mosul in Iraq and Manbej, Alrai, Jarabulus and other communities near the Syrian-Turkish border, he said.

According to estimates, the number of IS fighters reached several tens of thousands in those areas, “but the battles did not yield thousands of dead or captured fighters.”

“That’s why it’s worrisome – these people are gone. They either integrated into noncombatant communities or, more likely, infiltrated into neighboring countries – to Turkey, and from there to Europe and other Middle Eastern countries, and in Libya’s case, all over North Africa.”

He said that 700 Tunisian fighters are unaccounted for, while thousands more are being sought.

“We exchange wanted lists with Gulf and North African countries, with Jordan, Lebanon, Turkey, as well as France, Belgium, Germany and other countries, bearing the names of militants we believe fought for IS,” he said.

“Some of the names were found in captured IS operation rooms along the Syrian-Turkish border. There are still no concrete warnings about attacks that these fugitive fighters may try to carry out, but we have no doubt that some of them will, or at least try to set up terrorist infrastructures in their countries of origin.”

He said that, over the last year, intelligence-sharing practices among Arab and Western countries have improved dramatically, making the chances of foiling their attempts much higher, “but the chance that they’ll carry out an attack where they currently are still exists.”

He added that recent clashes along the Syrian-Jordanian border resulted from attempts by former IS fighters to cross into Jordan.

On Wednesday, the Jordanian media reported that national forces injured and arrested two militants trying to cross into Jordan, while others retreated back into Syria.

The source said that in the near future we are likely to see similar incidents along Syria’s borders.