You are here: Home / MidEastGulf / Al-Sisi: ‘We destroyed 80% of tunnels with Gaza’ 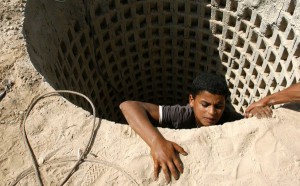 Egyptian President Abdel Fatah Al-Sisi announced that the buffer zone with the Gaza Strip has been expanded to three kilometres in some places and around 80 per cent of the tunnels have been destroyed, Falesteen newspaper reported.

About the general situation in Sinai, Al-Sisi said: “The armed forces and police have so far destroyed 150 terror bases and arrested 188 terrorists.”

He added: “Facing terror is a comprehensive attempt that includes fighting poverty, ignorance and offering an enlightened religious discourse that reforms the blurred ideologies.”

Evaluating the operation, he said that “massive results” were achieved. “Takfirists and terrorists were planning to do something in Sinai, but we spoiled their plans,” he said.

About Egypt’s role in the Arab region, he said: “There are certain countries trying to impose their agendas and threaten our national security.”

In line with this stance, the National Defence Council decided to expand its involvement in the Saudi-led air and naval operation against the Houthis in Yemen.