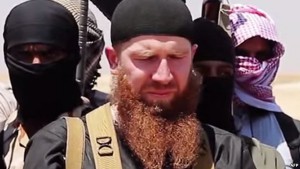 A leading figure of the Islamic State (ISIL) terrorist group Abu Omar al-Shishani was killed during the bombing of an ISIL convoy, according an Iraqi source.

Al-Shishani, a Georgian-born Chechen, was in charge of ISIL propaganda activities.On Sunday, the Iraqi Air Force attacked the convoy of ISIL leader Abu Bakr al-Baghdadi in the Western Iraqi province of Anbar. The motorcade was heading to a meeting of ISIL commanders.

The Iraqi military reported that al-Baghdadi was injured as a result of the bombing.

The ISIL movement has gained notoriety over the past year for its horrific videos of the beheading and torturing of Syrian army officers, non-Sunni civilians, foreign journalists and aid workers in the Middle East and North Africa.

Most recently, it has refocused on destroying ancient temples and artifacts in Syria’s Roman-era city of Palmyra, claiming that the 2,000-year-old monuments promote idolatry.

World political and religious leaders have repeatedly underscored that the ideology of ISIL distorts and profanes the principles of Islam.