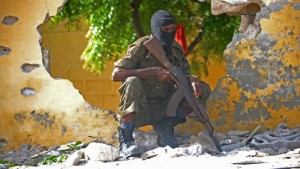 The Somali Islamic extremist group al-Shabab had released a video showing its members executing African Union soldiers during an attack on their base in Somalia in September.

The video, reported Tuesday by SITE Intelligence Group, which monitors jihadi activities, shows armed fighters rampaging through what looks like a camp for Ugandan troops.

Al-Shabab says it killed more than 50 Ugandan troops in the attack on a base for peacekeepers in the town of Janale. Ugandan officials have reported only 19 deaths.

Ugandan President Yoweri Museveni said after the attack that al-Shabab may have taken some prisoners and blamed commanders for being “asleep” when the attack happened.

The video shows an alleged Ugandan prisoner in handcuffs and other soldiers being shot at close range with an AK-47 rifle.