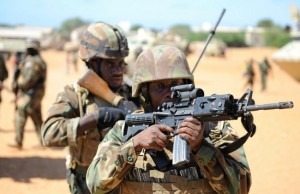 Al-Shabab militants fought a gunbattle with African Union peacekeeping troops in Somalia after ramming a car laden with explosives into their base south of Mogadishu early Friday, military officials and a spokesman for the group said.

The dawn attack in Leego – some 130 km south of the Somali capital, on the main road connecting the capital and the city of Baidoa – came as residents gathered for morning prayers.

“A car bomb rammed into the AU base in Leego and this was followed by heavy exchange of gunfire,” Major Nur Olow, a military officer, told Reuters. “First, AU forces opened fire at the speeding car bomb. The car forced its way in.”

The fighting was still raging three hours after the assault began, a second official said.

“There is still heavy fighting between Burundian forces and Al-Shabab at the Burundi base in Leego town,” said Abdikadir Mohamed Sidi, the governor of the Lower Shabelle region, adding it was “too early to know casualties.”

The peacekeeping force, known as AMISOM, is made up of troops mainly from Kenya, Uganda and Burundi.

Sheikh Abdiasis Abu Musab, a spokesman for the Al-Qaeda-aligned group, said the militants had rammed the car bomb into the base and that “heavy fighting goes on inside the base.”

He said the militants had killed 35 soldiers. The group often gives higher death tolls than officials.

An African Union spokesman could not be reached for comment.

This was the latest of several attacks by the Islamist militants, fighting to overthrow the Western-backed Mogadishu government, since the Muslim fasting month of Ramadan began a week ago.

Additional security had been deployed for Ramadan, as officials had warned of a heightened security risk as Al-Shabab’s fighters have often launched attacks during this period.

It was also behind two attacks in Mogadishu in the last week. On Sunday, militants stormed a national intelligence agency training site and, Wednesday, it targeted military instructors from the United Arab Emirates.