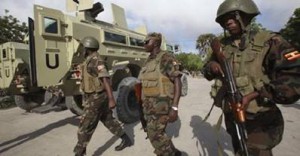 Since 2011, the African Union force in Somalia, AMISOM, has delivered blow after blow to Islamist militant group Al-Shabab, pushing the group out of nearly every major town and city it controlled.

On June 26, al-Shabab delivered some payback. In a coordinated attack, al-Shabab units from three regions converged on an AMISOM base in the small town of Leego. Just before 5 a.m., a suicide bomber detonated a car filled with explosives at the gate. Hundreds of al-Shabab fighters then stormed the base, quickly overpowering the AU force of 120 Burundian troops.

“I would estimate that they were up to 1,500 men,” said Abukar Abdullahi Ishaq, Leego’s district commissioner. Others put the number of attackers at 500 – still too many for the AU soldiers to handle.

Ishaq and other regional officials escaped. Others were not so lucky. Ishaq’s deputy was captured by the militants and beheaded. In all, more than 50 Burundian soldiers were killed.

Analysts say the attack exposed weaknesses in AMISOM as well as Somalia’s national army, which often works with the AU force in operations against al-Shabab. Foremost among the problems are a shortage of helicopters and personnel and a lack of coordination among AMISOM contingents.

Paul D. Williams is an associate professor of international affairs at the George Washington University in Washington, D.C., currently writing a history of the African Union Mission in Somalia.

“AMISOM is stretched,” he said. “22,000 troops is not adequate to control the whole of south-central Somalia. But importantly, it is not just a question of numbers; it is often a question of mobility and the ability to project firepower rapidly to specific areas.”

He said AMISOM is crucially lacking the military aviation units and rapid reaction forces that are available in other multinational forces.

It took AU soldiers more than 48 hours to reach Leego after the attack, although that was partly because al-Shabab fighters were believed to be waiting on the roads, ready to ambush any incoming troops.

A Somali official who did not want to be named noted that Ugandan forces with AMISOM are stationed at an airport just 30 kilometers away from Leego. Ethiopian forces are just 70 kilometers away.

When Ugandan forces finally reached Leego, al-Shabab fighters just slipped into the forest, saving its men and ammunition to fight another day. That highlights another problem AMISOM faces: lack of resources to chase al-Shabab into the countryside.

Williams said that when AU and Somali troops were taking over town after town in the past few years, al-Shabab forces mostly escaped with little harm.

He said AMISOM has found it very difficult to destroy rather than simply displace al-Shabab’s key fighting units.

“In part, because the mission lacks the aviation assets that would enable them to destroy more al-Shabab assets; and in part, because al-Shabab forces have generally chosen to withdraw rather than fight when confronted by offensive AMISOM operations,” he said.

An AMISOM commander who insisted on anonymity says the failure to reinforce the Burundians was an “embarrassment” to the AU force.

“Air power is needed for operations and for reinforcing troops like the Burundian unit,” said Williams.

He added, “You can’t carry your wounded and dead from one town to another; we need air evacuation.”

Who gives the orders?

The commander told VOA there also is a sense of “incoordination” among the heads of the six national contingents whose soldiers make up the AMISOM military force.

“Some commanders are not taking orders directly from AMISOM commanders. Instead they are seeking direction from their countries,” he said. “There is not even a plan to reinforce each other when attacked [in Leego] like this nature.”

Currently, AMISOM’s military force is made up of soldiers from Uganda, Burundi, Djibouti, Sierra Leone, Kenya and Ethiopia. Each national contingent has its own commander, who in theory is to report to AMISOM’s military chief.

Williams said the groups often have difficulty working together.

“At the military and operational level, AMISOM has always been a decentralized mission where force commanders have struggled to control and coordinate actions between the different national contingents,” he said.

“The [contingents] have often dictated their own preferences within ‘their’ sectors. The experience of the Burundian contingent in Leego should be seen in that context,” he continued.

The other main challenge is that Somali troops are not ready to take over from AMISOM troops or at least keep hold of areas taken from al-Shabab. The government wants to train and equip up to 28,000 Somali soldiers but they are not all ready.

“AMISOM troop numbers were initially planned on the assumption that the Somali National Army would quickly develop into an effective fighting force capable of taking the lead in the fight against al-Shabab,” Williams said.

“This has not happened. This has left AMISOM with too few troops to dominate its large area of operations. Instead, it is stretched thinly across a large area and spends much of its time guarding static positions and protecting mission supply routes. This has taken the pressure off al-Shabab,” he said.

Even though there is a talk of a possible new round of offensives against al-Shabab, commanders believe that without more air power, such missions would stretch AMISOM and Somali government forces to the breaking point.