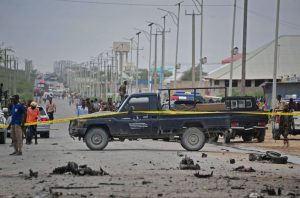 A Somali military officer says a suicide bomber blew himself up at a military academy west of Somalia’s capital, killing at least five soldiers, like reported by time.com.

Col. Abdi Hassan said the bomber dressed in a military uniform walked into the Somali military training camp on Monday morning and detonated explosives strapped to his waist near soldiers and officers.

He said the bomber, posing as a military trainee, had crossed the gate checkpoint and targeted soldiers and officers resting after their daily military exercises.