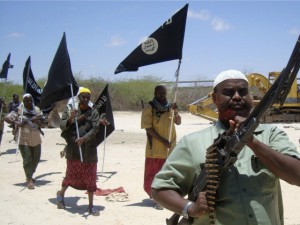 The Somali Islamist terror gang known as al-Shabaab—traditionally allied with al-Qaeda but said to be considering overtures from ISIS—has been very active lately.

On Friday, al-Shabaab attacked African Union positions in southern Somalia, seeking to inflict damage on international forces supporting the Somali government. The terrorists claim this attack was successful, killing a large number of African Union troops, while the AU says its forces handily repelled what it describes as “yet another futile attempt by al-Shabbab to discredit security gains” made against it.

Al-Shabaab has also been making plenty of trouble in neighboring Kenya, where they staged a disgusting bloodbath at a university in the border county of Garissa last April. Gunmen thought to be loyal to al-Shabbab conducted another raid into Garissa this weekend, raiding a village and firing indiscriminately at unarmed construction workers after targeting a military vehicle with an explosive device.

The militants say they have an even bigger operation in mind for the coming days, timed to coincide with the beginning of the Muslim holiday of Ramadan on June 17. “We are planning to give Kenyan non-believers a true taste of jihad in the next few days and weeks,” a senior al-Shabaab commander is quoted by AllAfrica.

According to this report, the terrorist group claims to have already infiltrated the northeastern region of Kenya, where it threatens to “keep targeting and destroying Kenya’s education sector and business sector,” along with attacks on Kenyan troops participating in peacekeeping operations in Somalia.

Daniel Pipes quotes the governor of Kiambu County in Kenya, William Kabogo, saying that “Christians are now converting to Islam in large numbers just to be safe, in case al-Shabaab strikes, while those who have not converted fully are attending madrassas to learn the Koran and Muslim prayers just in case.”

Pipes reports this tactic of learning to “pass as Muslim” has become common among Christians threatened by al-Shabaab and ISIS. In both the Garissa University massacre and the 2013 atrocity at a shopping mall in Nairobi, al-Shabaab killers notoriously asked prospective victims whether they were Muslims and demanded they recite Islamic prayers or details from the Koran as proof before deciding whether to spare their lives.

As Governor Kabogo asserted, “If students in Garissa University knew the Quran and how to pray in Arabic, they would be alive today. That is the fear the Al Shabaab has instilled in Christians who are now becoming Muslims as a matter of necessity.”

Kenyan villagers living along the Somali border have complained, with support from international organizations such as Human Rights Watch, that their government’s forces don’t exactly rush into battle with al-Shabaab to protect them. A recent report alleges that “Kenyan police repeatedly ignored besieged villagers’ pleas for help and allowed Islamist jihadists to rampage unchecked in a killing spree that claimed 87 lives last summer,” according to the UK Independent. The report says the police didn’t arrive on the scene until fully 12 hours after al-Shabaab fired the first shots, giving the militants plenty of time to escape and stage further attacks.

Al-Shabaab’s recruiting efforts might not be on par with ISIS, but they’re distressingly successful nonetheless. One of the militants killed in this weekend’s attack on northern Kenya was a British Muslim convert named Thomas Evans, just 25 years old. According to the BBC, his family learned of his death from journalists and were swiftly able to find photos of his corpse on Twitter.

He was one of about 50 British citizens to have joined al-Shabaab, telling his family he wanted to move to Egypt, but surfacing in Somalia in 2012. His mother said he became radicalized after meeting some local people with “some very twisted, warped ideas of Islam,” which Evans pursued by consuming jihadi materials online.

“He would never tell me what he was doing,” Ms. Evans complained. “He did say if the worst thing happened, I wasn’t to cry because he would be going to paradise, but somehow I cannot celebrate that.” If al-Shabaab makes good on its threats of a major Ramadan offensive, there will be many other people with little to celebrate before June is over.