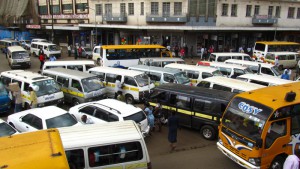 Police have issued an alert following alleged plans by terror groups Al-Shabaab and ISIS to attack public service vehicles, border regions and Mombasa. This is based on intelligence gathered on the groups’ planned activities ahead of the Festive Season.

Inspector General of police Joseph Boinnet said Al-Shabaab still remains a major threat in areas along the common border. “Daesh, also known as ISIS is equally among our major concern. Available information show that ISIS still continue to target our youths for recruitment online, but elaborate efforts have been employed to deal with the attempts of group to indoctrinate our youths,” said Boinnet in a statement.

He said the targets include security personnel, and establishments along the border as well as PSVs plying routes along the border. Boinnet urged members of the public to help by being vigilant and sharing information. He added that Al-Shaabab, which has been blamed for most of the attacks in Kenya are splitting into smaller groups and infiltrating into the country especially in Mandera, Wajir, Garissa and Lamu Counties.

According to the police, the group wants to take advantage of ongoing rains to get into Kolbio near Hulugho, Garissa County. “We are also aware Al-Shabaab is planning to amass its militants in Jedahaley area in Somalia with intention of infiltrating into the country for attacks. Some are hiding in small groups pretending to be herders around Hida and Dambala in Somalia while plotting to sneak into the country,” said the statement signed by spokesman George Kinoti.

The police boss warned that terror groups may exploit clan fighting in Wajir County between Degodia-Matan and Degodia-Jirail and attack. He appealed to clan elders to help in averting further fighting. Boinnet said Al-Shabaab are making efforts to infiltrate back to Boni Forest with an intention of sneaking to other parts of the region and attack locals.

“We have deployed officers accordingly and call upon all Kenyans to exercise higher levels of vigilance and report promptly any suspicious person or activity that could endanger public safety or our security,” he added.