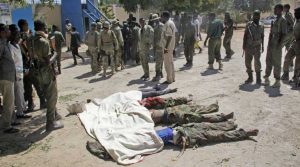 Al Shabaab fighters attacked a remote Somali army base northwest of the capital Mogadishu on Tuesday, killing several government soldiers, officials and the militants said like reported by jpost.com.

The Islamist group, which has launched several attacks there in the last few years, said it had seized control of the entire town of Goofgaduud.
“We have captured Goofgaduud. We killed 16 soldiers in the fighting,” said Sheikh Abdiasis Abu Musab, Al Shabaab’s military operation spokesman.

Government and military officials were not immediately able to confirm the seizure of Goofgaduud, which lies about 250 km (160 miles) northwest of Mogadishu.

“Al Shabaab attacked our base in Goofgaduud in the morning and ambushed other forces that were sent for reinforcement,” said Mohamed Aden, a military official in the region.

“We lost at least seven soldiers and one military truck was burnt,” he told Reuters.